A hint of festive spice: Rhubarb and ginger crumble 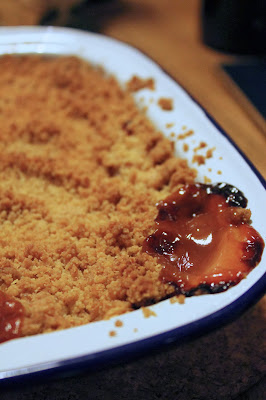 The decorations are up, the cards are posted and the dining table is awash with wrapping paper, ribbon and tags. Christmas is well and truly here in the littlebitgreedy household. Although Mr Little Bit Greedy spends much of November (and a good part of December) Bah Humbug-ing, he does actually love Christmas and once we hit the home straight he gets suitably merry and jolly. I love Christmas too for so many reasons and it has to be said that the level of greediness goes up quite significantly around here at this time of year. The feasting angle is an important one to me - we feast together with immediate family, with extended family, with friends and with neighbours. Any excuse really!

I try not to indulge in festive foods too early - a month of non-stop mince pies tends to take the edge of this annual treat. But it does seem that as we creep ever-closer to 'the big day', my cooking does take on a little seasonal flavour. I got a little over-excited when I spied some of the first forced pink rhubarb in the supermarket last week. Not British yet, but from Holland which, for now, will have to do. Forced rhubarb is such a treat during the dark days of winter - it is lovely to feast on something so bright and vibrant in the months where we are otherwise weighed down with root vegetables and cabbages.

I love most rhubarb-based desserts but my favourite simply has to be a classic rhubarb crumble with thick vanilla-scented custard. On this occasion, I decided to spruce my crumble up with the addition of ginger (both stem and ground), cinnamon, a little orange zest and ground almonds. Ginger goes so well with rhubarb and the flavours here really lift this crumble without taking it too far from the traditional original (I can't bear a crumble with ideas above its station - no granola-topped fruit compote for me!). 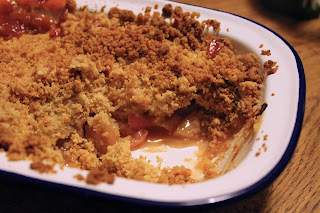 The recipe is, essentially, one from Annie Bell's fantastic book 'Gorgeous Desserts'. This seems to be out of print in this country currently although second-hand copies are available. I have tweaked the recipe to include the orange zest and also the spices in the crumble itself. I have also halved the original recipe which makes enough for six. 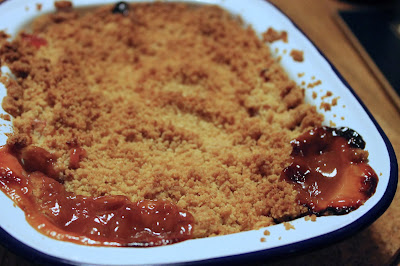 2. Wash rhubarb and chop into 3cm pieces and chop the stem ginger into small pieces. Toss both together in a bowl with orange zest, 1 tbsp of flour and half the sugar. Place in the bottom of a shallow ovenproof dish.

3. Mix together the remaining sugar and flour with the ground almonds, ground ginger and cinnamon and rub in the butter until you have large crumbs. Sprinkle over the top of the fruit and bake for approx 35 minutes until the crumble is golden and crisp.

4. Serve with lashings of custard or good vanilla ice-cream.
Posted by Antonia at 06:09