How not to bake a bone-shaped cake: Clandestine Cake Club April 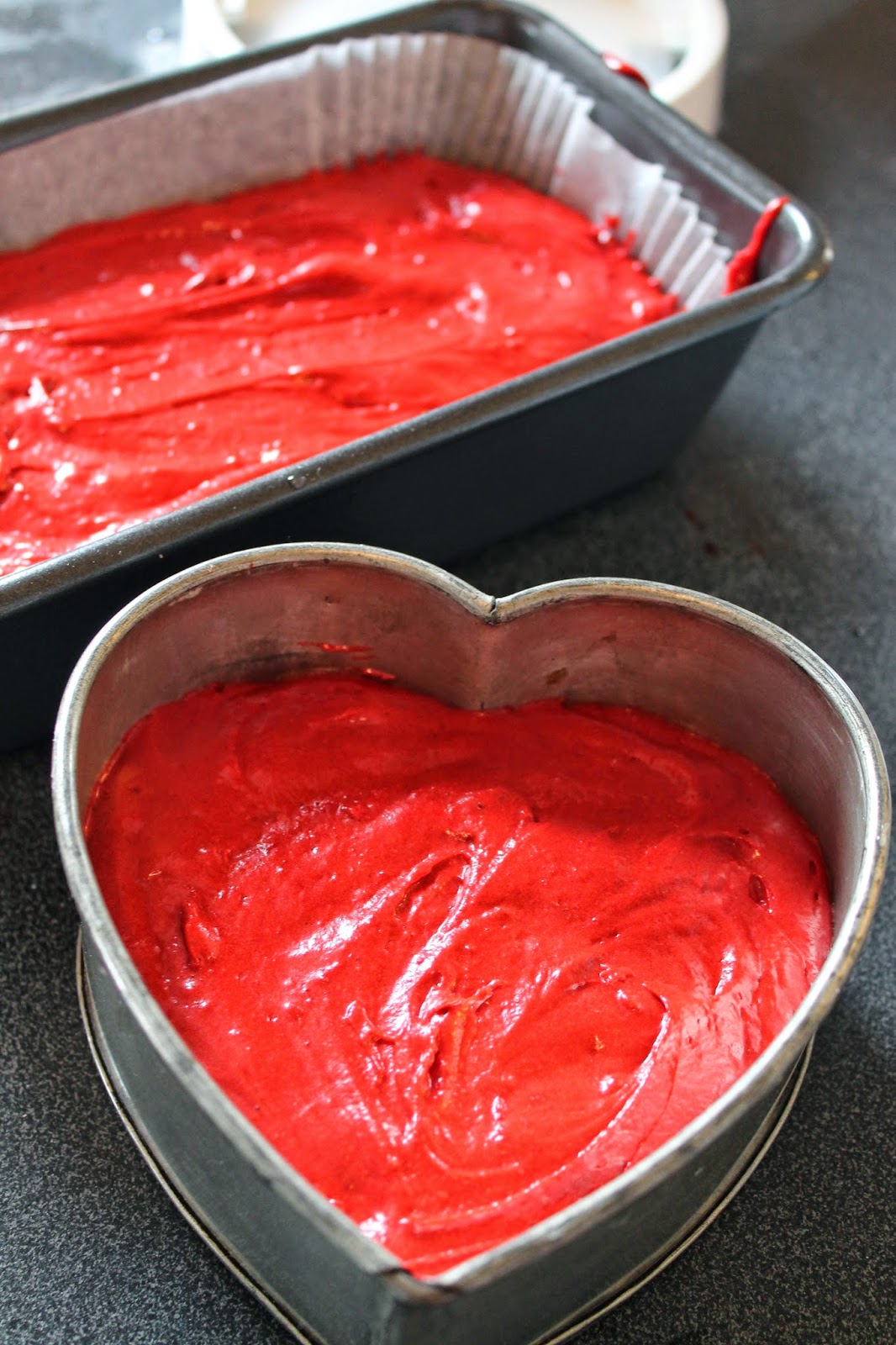 As a child, I enjoyed being the centre of attention. Kind people might have called me 'confident'. Those more realistic might have described me as a show-off. One of my favourite toys was a magic set and I loved putting on elaborate magic shows for poor unsuspecting guests and family members. I loved magic and was often practising card tricks and slight of hand vanishing acts. I was enthralled by Paul Daniels and at one point actually wanted to be him when I grew up (…or a female version at any rate). 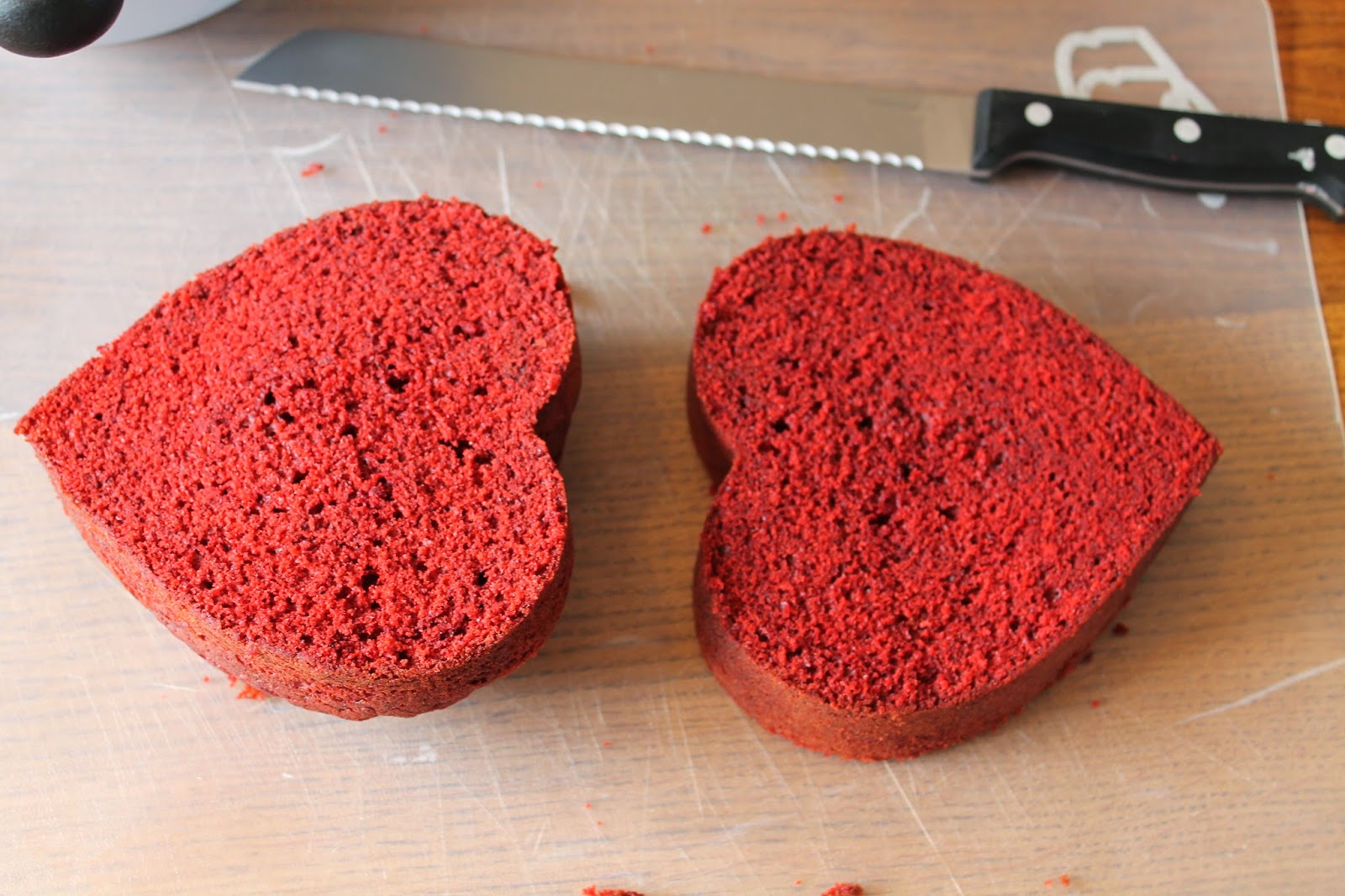 In adulthood, I have thankfully put my desires to be a professional magician to one side. These days, it is the alchemy of baking that holds me in its thrall. Is there a happier thing to do than bake a cake? I love every part - the careful weighing of ingredients, the mixing together, the sneaky taste of cake batter, the smell and anticipation as the ingredients work their magic in the oven, the patience required as the cake cools, the decorating and finally… the eating! Perhaps the best thing about cakes is that they are designed to be shared and, as such, bring happiness to others. 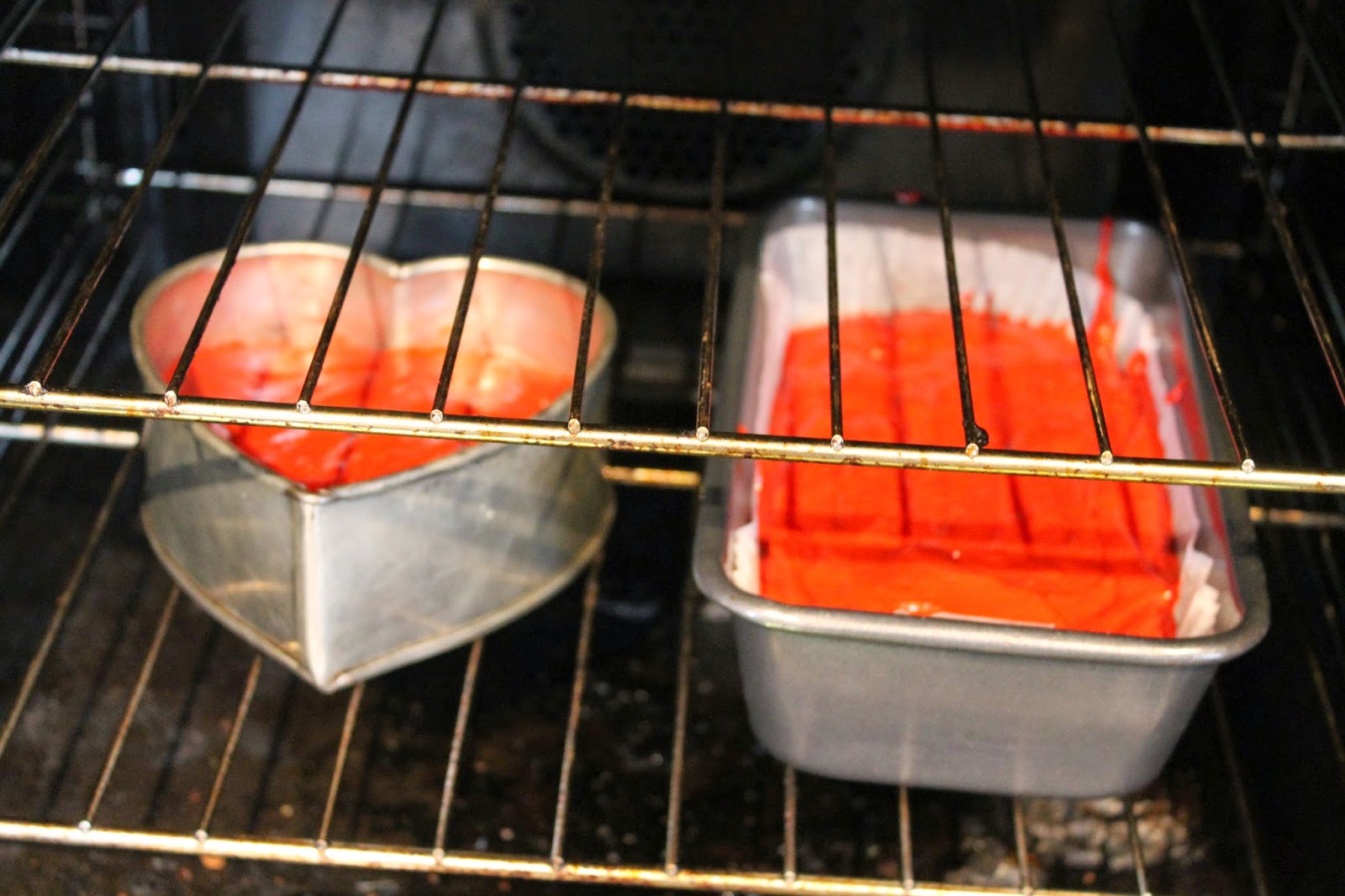 The ingenious Clandestine Cake Club was founded on the notion that the sharing of cake is wonderful and special thing. Thanks to its founder, across the nation (and world, in fact) a love of cake is bringing strangers together. The idea is a simple one; each month the organiser chooses a theme and members must bake a cake that meets with the theme and bring it along to the meeting to share with others. No judging, no individual cakes - just whole cakes for sharing and enjoying. We all try a tiny (or not-so-tiny) slice of each and at the end of the meeting share out slices of each cake to take home. 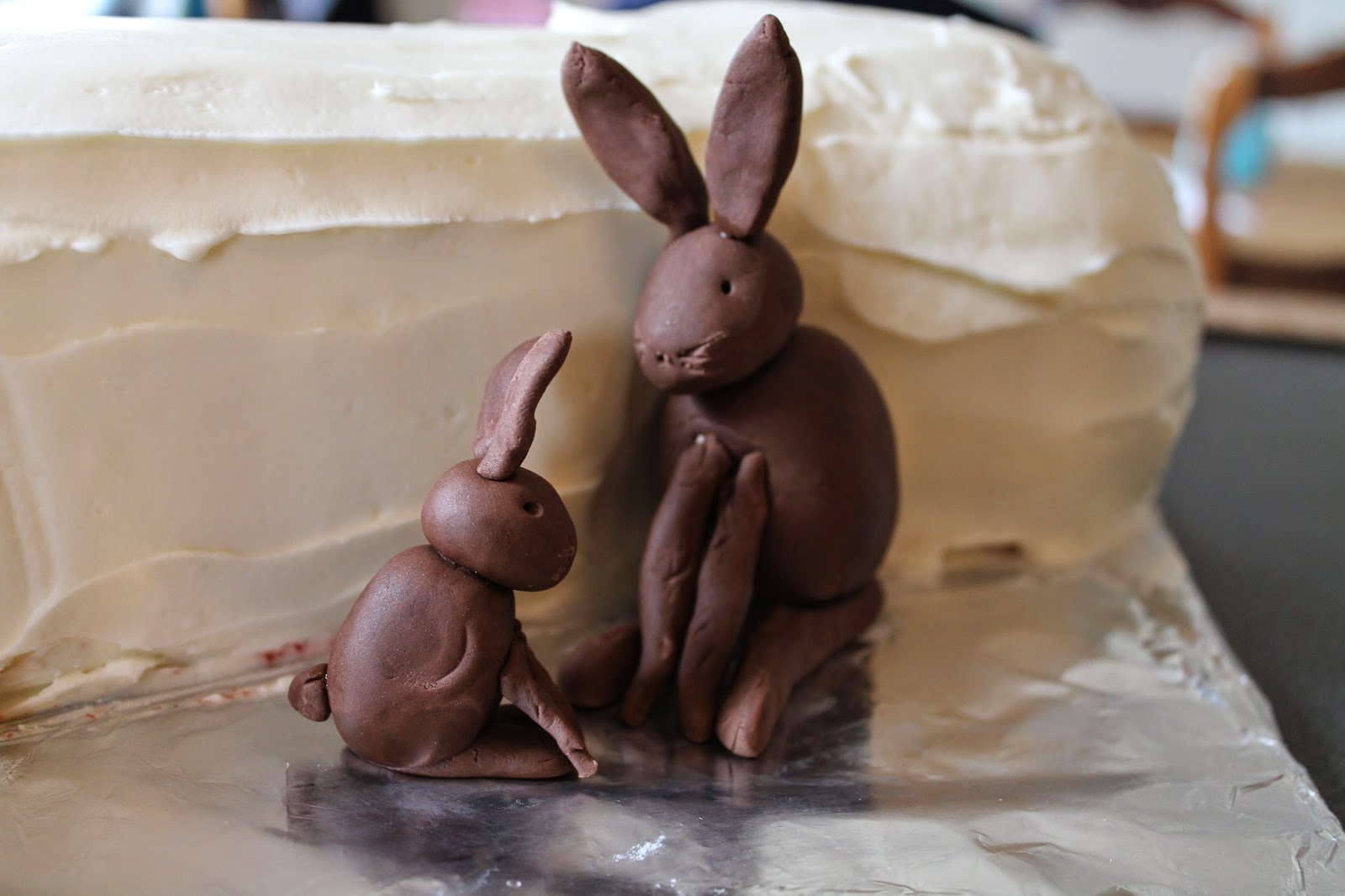 I joined my local branch of the CCC in November last year and have thoroughly enjoyed each meeting. Themes have included 'Euro delights', 'What's your tipple' and 'One of your five-a-day'. This month though was the toughest challenge to date. Over the next few months, my local town is playing host to a fantastic hare hunt. Planted throughout the town are fifty or so giant hares which have been decorated by local artists, celebrities, school children and businesses. At the end of the year, the spectacular hares will be auctioned off for charity. Our challenge this month, was to use the hare hunt as inspiration for an appropriately decorated cake.

Now, I do love to bake cakes and I even quite enjoy decorating them but (and this is a big but), I am not particularly imaginative. I like to look at a cake and copy the decoration. And I am definitely not any good at 'shaped cakes' so a hare-shaped cake was out of the question. A happy Saturday afternoon spent hare hunting gave plenty of food for thought - a pyramid-shaped cake as an homage to the splendid egyptian P-hare-oh perhaps? A millionaire's shortbread inspired cake in support of the Million-hare which sits in the window of a local hairdresser? In the end it was the 'Bare Hare' that caught my imagination. This hare finds its home at the Royal Agricultural University and depicts the anatomy of a hare - bones, muscles and all. I instantly thought of a blood-red velvet cake and then set upon my design. A bone seemed an obvious choice seeing as the traditional red velvet icing is white. It was here that my 'good' idea ended. Unsure as to how to create a bone shape (cutting the shape out of a rectangular sheet cake would be the answer next time (next time? I think not, but you never know!). Instead I decided upon a loaf cake for the main part of the bone with two heart shaped cakes for the ends. A little trimming and I'd have the classic bone shape. Or so I thought. 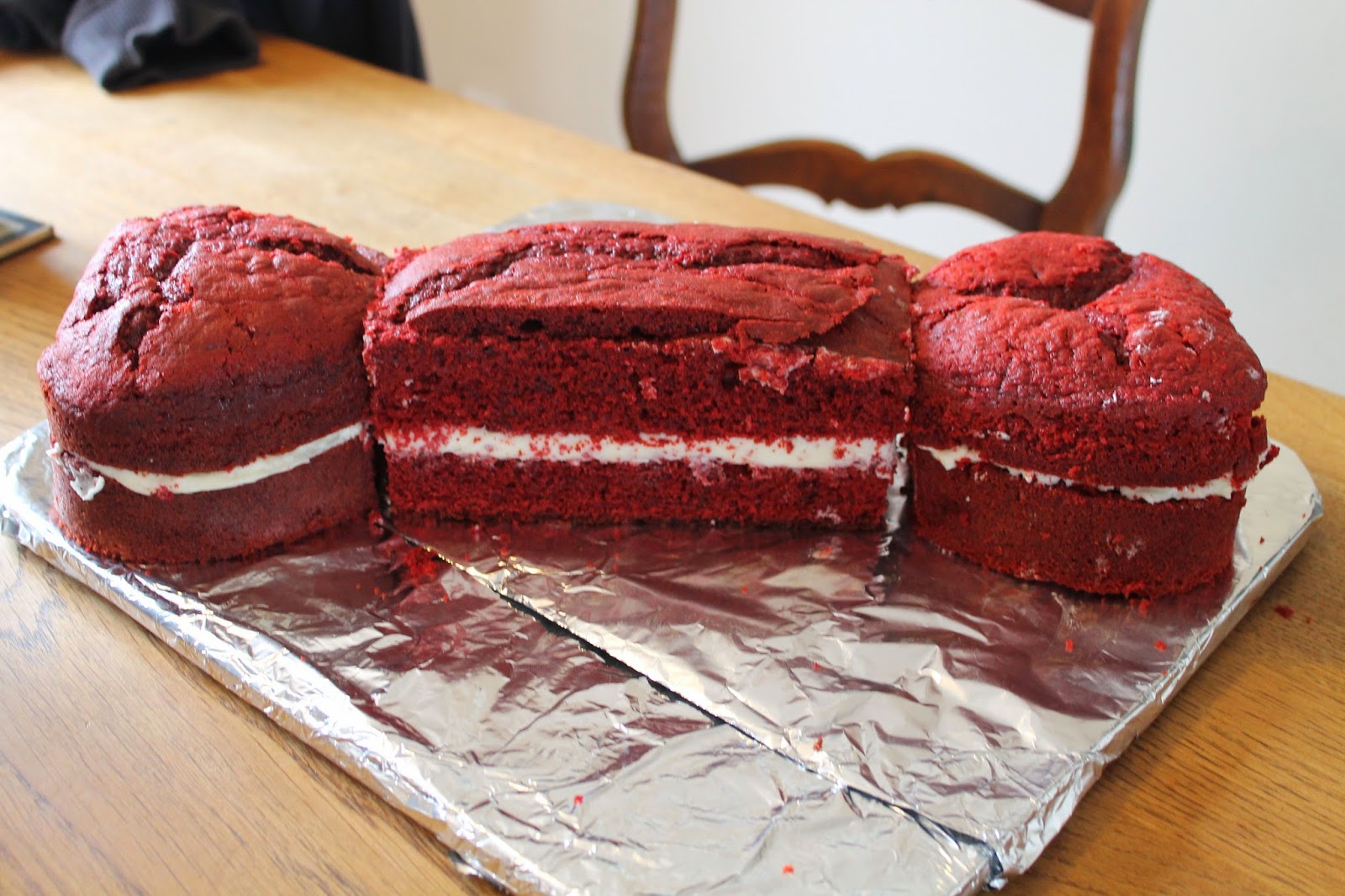 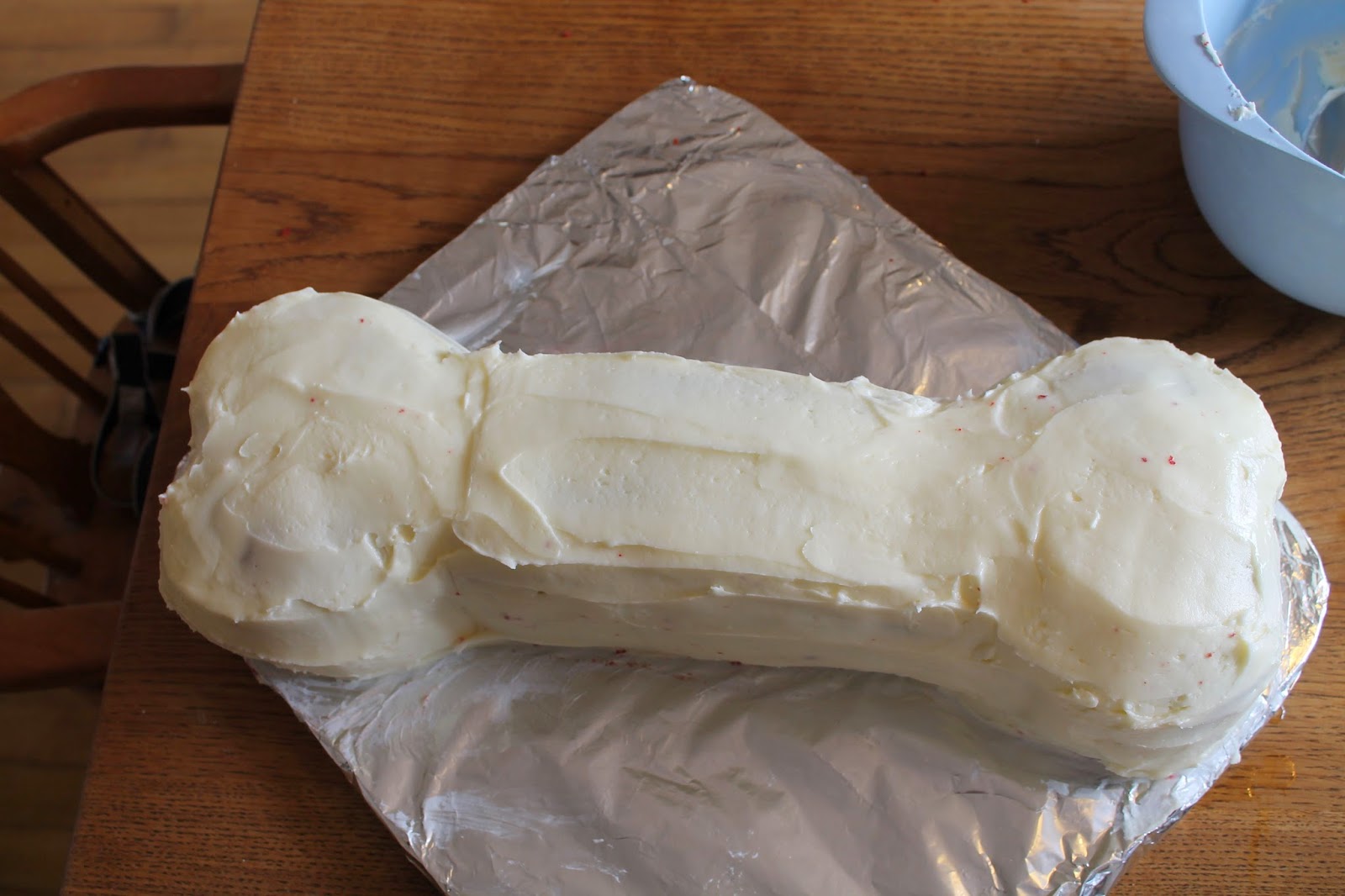 Having turned my kitchen into something resembling the scene of a massacre, I came to the conclusion that (as suspected), shaped cakes are definitely not for me. My bone cake ended up being ENORMOUS. Worried it might be dry, I split each cake in two and iced the middles. The icing on top went badly. In haste, I didn't have time for a crumb coat and so it was liberally speckled with bright red crumbs. Mr LBG suggested another layer of icing. It seemed like such a good idea! Not so much. The cake was now white but, much as I love a cream cheese frosting, this ended up with almost an inch of icing. Just a touch on the sickly side. 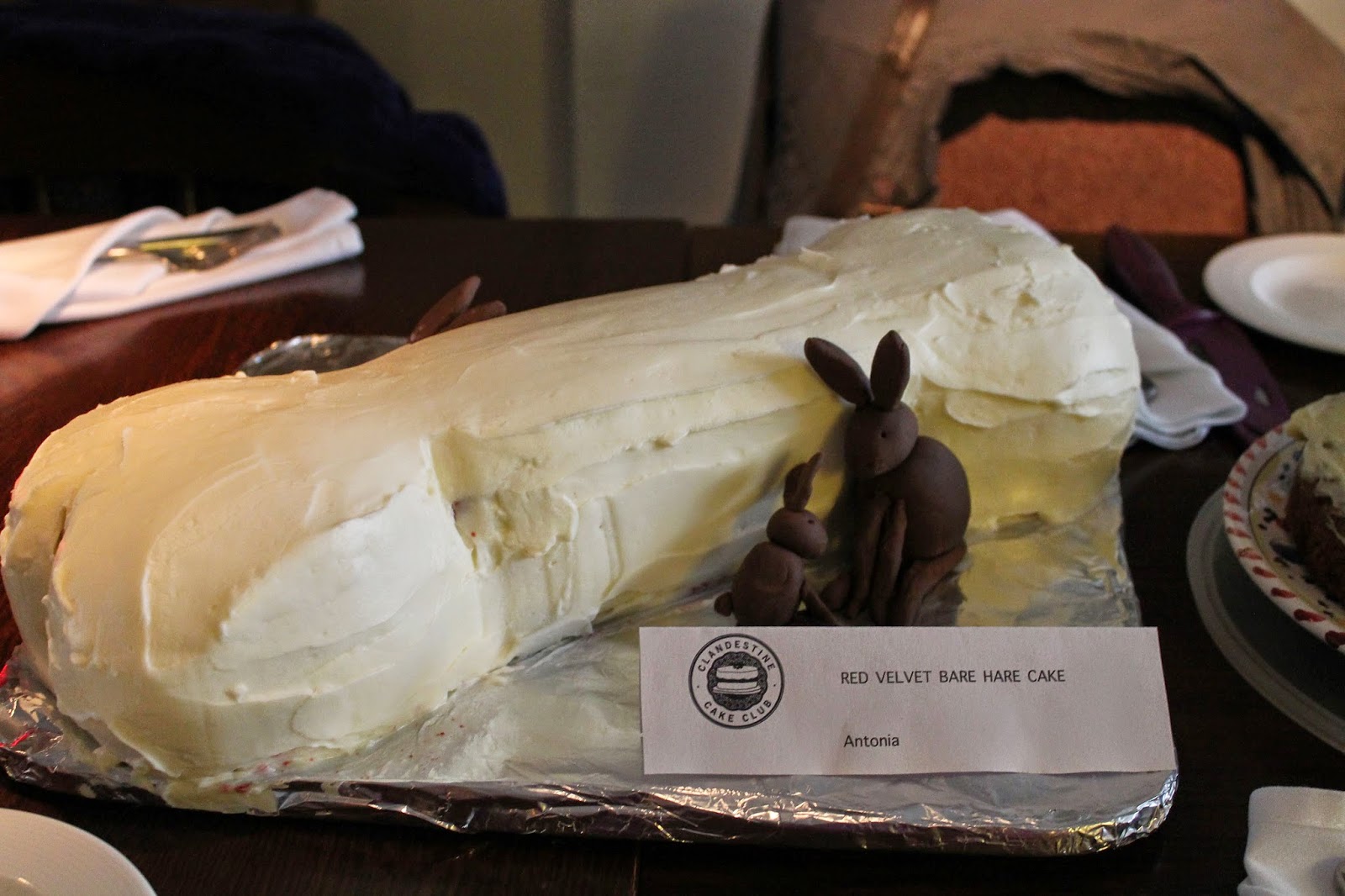 Not to be discouraged, and putting aside all sniggers from Mr LBG about how it looked rather… rude, I persevered. A small family of fondant hares added a cute touch to my otherwise monstrous bone. I carried it on a huge tray to the gathering where it loomed large amongst an array of beautiful, artistic and more elegant creations! A good time was had by all however and it is the taking part that counts, of course.

A big thank you to our organiser for another fun evening of cake! Here are a few of the more elegant creations…