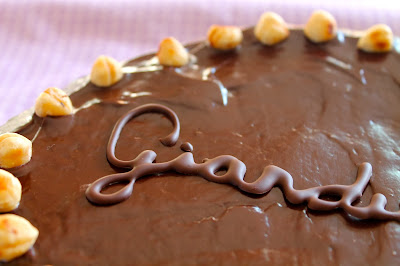 Whilst flicking through this month's edition of BBC Good Food magazine, I stumbled upon an article about the Clandestine Cake Club. I hadn't heard of this club before but loved the concept - in towns and cities around the country (and world) groups of keen bakers meet on a monthly basis to share cake. What's not to like about that?

Each month, there is a theme and each member must bake a cake to take along to the meeting. The only 'clandestine' part of the whole thing is the venue of the meeting. This is revealed only to those attending a few days before the event. Cakes must be whole and sliceable - cupcakes, muffins, brownies and the like are strictly forbidden as they are considered at odds with the whole notion of sharing cakes together. Best of all, you get to take home a selection of the leftover cakes to graze on over the next few days!

This struck me as great fun and a good challenge for me too but I was convinced that I would be unlikely to find a local group as I live quite a way from any major towns or cities. Imagine my delight when I discovered a group in my local market town. This month's theme was 'Euro Delights' so I took to the sofa with a cup of tea and a tower of cook book to find inspiration for a cake from one of our European neighbours.
I decided to head to Italy for my cake and, inspired by watching The Hairy Bikers creating a divine-looking chocolate and hazelnut celebration cake, decided to try something similar. This Piedmont speciality makes use of Gianduia; the utterly unpronouceable yet delicious chocolate and hazelnut spread that is most commonly consumed by way of a jar of Nutella. The aforementioned bikers spread a rather more sophisticated version of this over the top of their cake but Goddess of cakes herself (Nigella) actually incorporated an ENTIRE jar of Nutella into the cake itself before topping with a gleaming chocolate ganache. It was this version that really seduced me!

I made the cake with freshly ground hazelnuts and finished by piping the word 'Gianduia' on the top in the way you might do with a Sachertorte. Nigella prefers to top hers with toasted hazelnuts but I'm strangely not particularly keen on whole nuts so just placed a ring of these around the edge. I was pleased with the result and particularly with my chocolate ganache - something which has caused me trouble in the past! It is very rich and would be good as dessert with strong coffee and a drizzle of cream. My husband exclaimed surprise that it wasn't particularly sweet - the recipe doesn't have any additional sugar other than that in the Nutella. 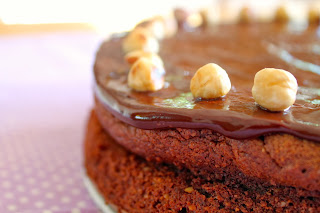 The recipe for this fabulous bake is on Nigella's website as well as in 'How to be a Domestic Goddess' so you can hop right over here to see it and I won't reproduce it. However, here is a quick guide for piping the lettering...

Torta alla Gianduia from Nigella's 'How to be a Domestic Goddess' 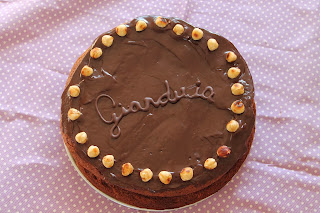 To decorate with piped lettering, you will need:

Melt 50-100g of dark chocolate in a bowl over simmering water (I did 100g which was far too much but I wanted to have several attempts in case they broke or I made a mistake with the piping (they did and I did).

Whilst the chocolate is melting, make yourself a little piping bag out of greaseproof paper. There is a nice tutorial on how to do this on the BBC Good Food website. I find it really handy to staple the top to keep it all nicely together.

Take a piece of paper and write out the word you are wanting to pipe just so that you have something to glance at, whilst piping. I found this helped as I feared I might mis-spell 'Gianduia' and also wanted to do a slightly fancier 'G' than I would normally do.

Spread a large piece of greaseproof paper on the worktop.

Spoon around three tablespoons of the melted chocolate into the piping bag.

Working quickly, pipe the word in one continuous motion so that all the letters are joined up together. Pipe some dots above any 'i' s!

Repeat a couple of times so that you have spares, refilling the piping bag as you go.

Use any excess chocolate to pipe random patterns to use as decorations elsewhere! 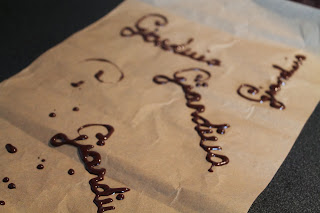 Allow to dry/solidify for a few minutes before carefully transferring to the fridge. Leave to harden completely (a couple of hours).

Do not touch the decoration with your hands - the chocolate will immediately melt. I discovered this to my peril (hence the slightly wonky end to my lettering).

Do not be tempted to pipe directly onto the top of the cake. Not only will it be hard to correct a mistake, but the heat from the melted chocolate could cause the ganache to split/go oily.