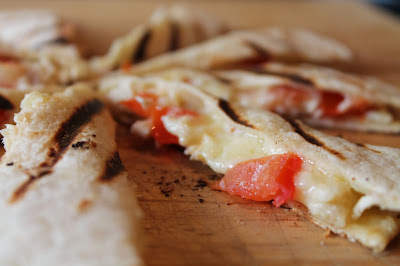 When we moved house a few years ago, we were delighted to be leaving behind the freezing and falling apart mess that was our rented home for the year that we spent making sure that a 'move to the country' was indeed for us. We were excited about our new home but very sad to be leaving behind the ancient, solid-fuel fired Aga that we had come to love. We were both new to Aga cooking and, after a few disasters, soon learnt to love its versatility. Our favourite Aga treat was the fabled 'Aga toastie'. For those not lucky enough to have been acquainted with the culinary sensation that is the 'Aga toastie', it is essentially a toasted cheese sandwich. It is better though. I cannot explain why really. It just is.

To make an Aga toastie, you simply make a cheese sandwich according to your tastes (Cheddar and onion marmalade for me please). Grab some of that clever silicon baking sheet stuff and pop it on the hot plate. Pop your sandwich on top and lower the lid over the whole thing. Moments later, open the lid and flip the sandwich over and repeat. In just a couple of minutes flat, you have the fluffiest, toastiest toastie you have ever eaten. No need for butter on the outside so you could almost argue it is healthy.... Well, perhaps not. Maybe just 'less bad for you'.

Anyway, no more Aga toasties for us. Instead, we have discovered the joy of the quesadilla. Almost as speedy (you have to preheat the pan rather than having the instant heat of the Aga, but needs must!), and equally versatile and tasty. We all love them and I found them to be an instant hit with my son which is handy as I am always in need of a speedy lunch that can be whipped up in moments after a hectic morning of singing, clapping and waving at Jo Jingles. Yes, my life really is that glamorous!

My son could eat little mini-wedges of these at around 10 months but they would probably suit baby-led-weaners earlier than this. 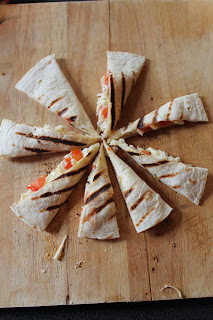 Being a creature of habit, I like the cheese and onion marmalade or chutney combination best. Sometimes I throw in a slice of two of ham for added excitement. But you can fill your quesadilla with almost anything, though cheese is a fairly essential element (queso meaning cheese, after all). For my son, I sometimes do cheese and grated apple or tuna, sweetcorn and cheese (think 'tuna melt'). Today I used shredded leftover roast chicken, chopped tomatoes and Cheddar. Mushrooms and onions work well if they are fried off a little to soften before adding to the filling. My husband likes a few jalapenos for the authentic Mexican kick. The fillings really are as diverse as your imagination. Vary the cheese according to the fillings - I once tried an Italian perversion of this Mexican snack with pesto, grated courgette, tomatoes and mozzarella. It worked a treat! 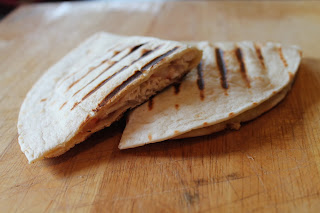 1. Take a griddle pan or even a large non-stick frying pan and set it on the hob to heat up to a medium heat.

3. Fry the filled tortilla in the dry pan on a medium heat for a minute or so on one side before flipping over and cooking the other side. You are aiming for a nice crisp tortilla and melty cheese goodness on the inside. Watch closely as they do burn easily!