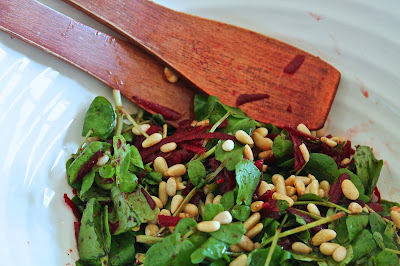 For some time now we have subscribed to a weekly vegetable box scheme via Abel and Cole. The vegetables are almost always in peak condition, taste exactly as they should and offer excellent value for money compared with our usual supermarket. Whilst we enjoy the challenge of cooking with vegetables we might not ordinarily choose, we also appreciate the fact that vegetables of which we are least fond can be swapped for something else. 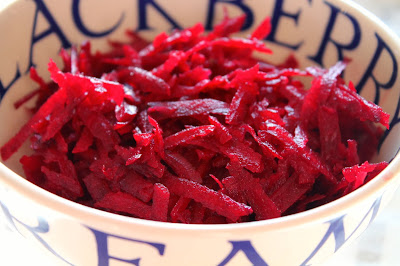 One of the vegetables which I struggle with is beetroot. I think it harks back to school days when it used to be served cold, swimming in vinegar, alongside mashed potato. The way the potato used to go pink still sends shivers down my spine. I still find the sweet taste and slightly strange texture of boiled beetroot hard to stomach but I have recently been converted to raw beetroot. Mr Little Bit Greedy loves beetroot and gets quite excited when it turns up in the veg box as he knows that it is highly unlikely that it will make an appearance in our household any other way. He usually roasts them whole and devours them whilst I nibble politely on the smallest one I can find. On this occasion, however, I decided to take the matter into my own hands. Accompanying the beets in our box was a suggested recipe which also made use of the fabulous watercress that was party of this week's bounty and I thought that I would try it out.

The combination of the grated sweet beetroot and peppery watercress did work together extremely well. A little freshly chopped chilli and a handful of toasted pinenuts were good additions too along with a simple balsamic and olive oil dressing. Next time, a good few bits of crumbly goats cheese will make an appearance too. Crusty bread to mop up those pink juices was all but essential. 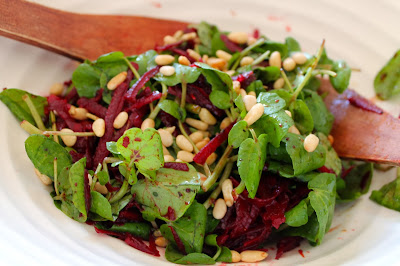 I loved this salad. Mr Little Bit Greedy was less keen. After tasting just one mouthful he looked at me in horror and asked whether there was orange in the dressing. Mr LBG has a severe hatred of orange (unless combined with chocolate and made by someone called Terry). There was no orange to be found but it was rather curious - the salad did indeed taste strongly of orange. Further investigation found the 'culprit' to be the beetroot itself which had a surprisingly orangey flavour. I know that orange is often paired with beetroot but have never eaten a beetroot that actually tasted 'orangey' before!

The recipe for the salad can be found over here and so I won't repeat it here. 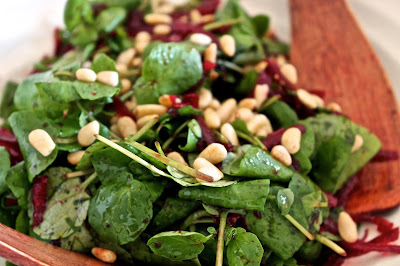 I am entering this salad into the No Croutons Required blogging challenge which this month is being hosted by Lisa over at Lisa'a Kitchen. The event requires participants to make a soup or salad which is suitable for vegetarians.
Posted by Antonia at 06:29

Email ThisBlogThis!Share to TwitterShare to FacebookShare to Pinterest
Labels: No Croutons Required, Salads, Side dishes, Vegetarian